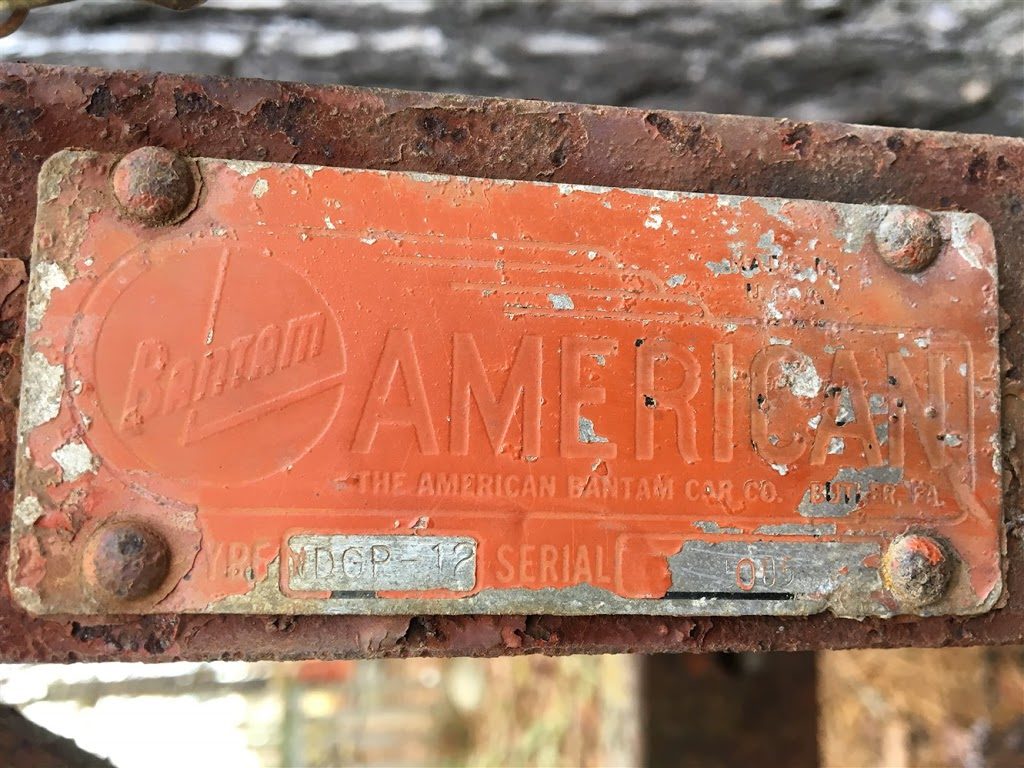 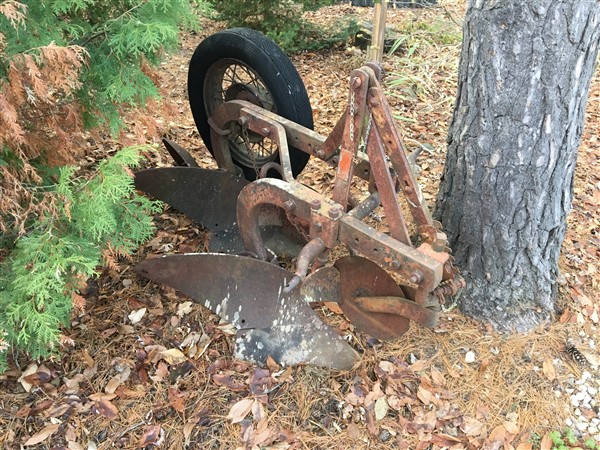 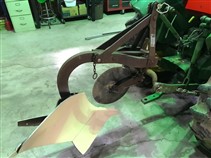 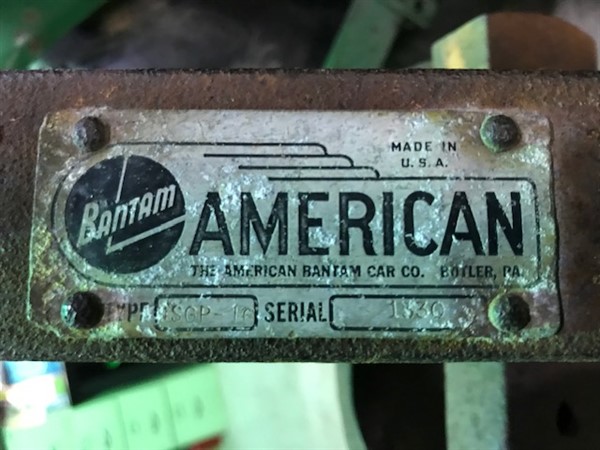 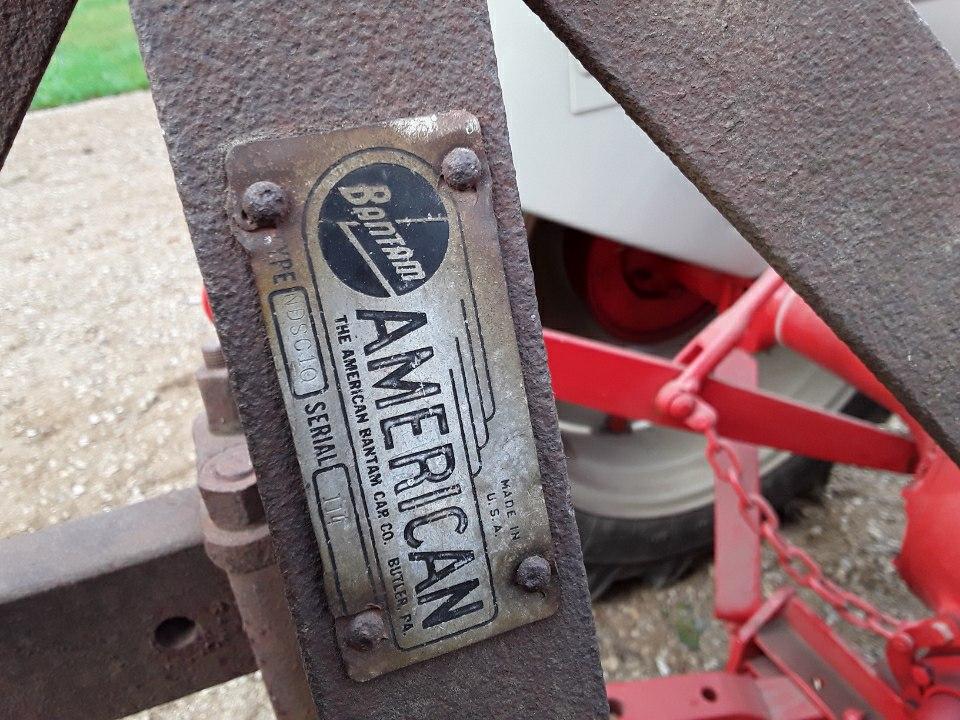 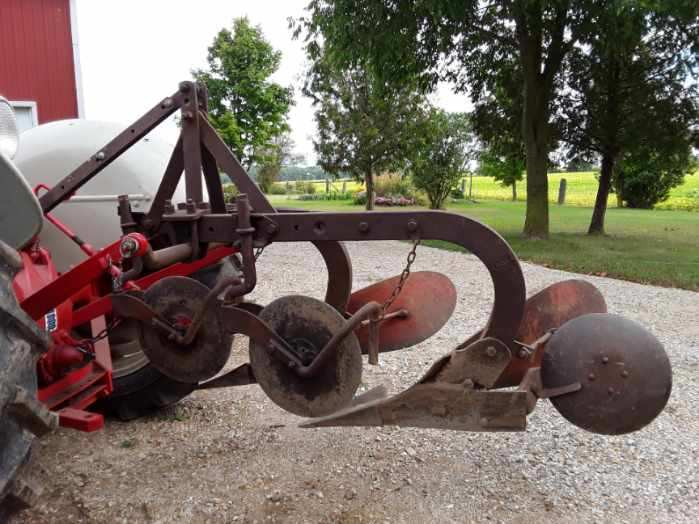 In February 2015, we received an email seeking help with identifying a plow with an American Bantam data tag. Here is the note:

” Hi there ,my name is Ted and I just purchased an American bantam bottom
plow for a Willys Jeep . I myself have been collecting this type of
stuff for years and have never even heard of one by AB . Do you have any
info on these or have you ever seen one
Thanks so much for your time in advance
Regards Ted “

In the following weeks and months we, along with Bantam, Monroe and Newgren experts tried to solve this mystery. Below are the blog entries we posted:

We received a note and pictures from Ted, who had purchased one of the two plows pictured. The plows are branded American Bantam, the same company that built the first WWII jeep prototype. The company located in Butler, PA is also known for its small cars. Some background information is provided here in this Newgren History.

Barry has been working with a few collectors and the American Austin Bantam Club to learn more about these plows. We are in agreement that the plows are re-branded Newgren models. But none of us had ever seen an American Bantam plow before. Both plows where found in northern VA.

We are still researching a couple of questions. We would like to know when Bantam dropped the Newgren name and began branding the implements as American Bantam. We believe it to be in the 1948 to 1954 time range. Second we would like to know how many and what type of implements were sold under the Bantam label.

We will post more information here, as we uncover it.

Our last post introduced our search for more information on Ted’s American Bantam plow.  Over the past few weeks, we, along with a few Bantam, Newgren and Monroe experts have been searching for answers to our questions about where and when the plows were produced.
The first part of the Bantam Plow mystery has been solved by Cathy Cunningham of the American Bantam Car Club (www.austinbantamclub.com/).  She sent us a newspaper clipping from 9/20/48 announcing that the Butler plant would produce farm equipment.  In addition, she also provided the following:
From the Bantam bankruptcy papers….”The management of Newgren as well as Bantam was entirely under the control of Monroe.  Of the various farm implements sold by Newgren, about 50% was manufactured by or purchased from Monroe, a small portion by Bantam and the remainder by unaffiliated companies.”4/19/1950.  The trustees found the activities of the Newgren Company, Bantam’s wholly owned subsidiary, which had been engaged unsuccessfully in the sale of agriculture equipment manufactured by Monroe, Bantam and others, practically ceased.Based on the above, we now know that Bantam was producing farm equipment, which most likely included plows, beginning in 1948.  It would appear that Newgren sales efforts had ceased by early 1950.  We would guess that Bantam replaced the Newgren tag sometime after mid-1950.  But we have just scratched the surface of how this plow came to be.
This has been a fun and rewarding undertaking.  We want to thank Ted for sending us the photos of the plows.  He uncovered an important (at least to some of us) piece of jeep history. We also wish to thank Clint Dixon, Lonnie Deweese, and Cathy for their help in getting the story this far.
Many stories remain to be told about Monroe, Newgren and Bantam.  It is our hope that this plow-find will kindle more research and published results.

Later we posted an update:

In February of 2015, we posted the great news that two Bantam plows had been found. You can read the first post here and the update here.  David Tracy has just posted an article on his trip to the Omix-ADA headquarters titled “The World’s Biggest Aftermarket Jeep Parts Company Is My Paradise“.  Among the pictures of the company’s museum is a Bantam plow.  A quick note to Omix-ADA has confirmed this is one of plows found by Ted.

We hope to visit the Omix-ADA museum one day to see the plow.

Then came a major surprise:

This is a story we couldn’t make up.  We received a note from Les from near Waterloo, Ontario who had found our posts about Bantam plows.  He said his father had an old plow with a Bantam tag that hadn’t been used for 10 years and was about to go to the scrap pile.  Les ask if we might know of anyone who would be interested in it.

We jumped on the opportunity.  Four days later, Barry was in Ontario to pick up this beauty.

The plow appears to be complete.  The coulters are frozen, but the landside gauge wheel hardware is there and is free.  It does have on old wire car wheel instead of a Jeep rim. but it adds character.  Not sure how much, if any restoration, we will attempt.

Evan had to miss this JPRT (Jeep parts retrieval trip).  Barry’s first pre-trip task was to determine what sort of paperwork he would need to bring the plow back to the states.  Some net searching indicated that all that was required for used farm equipment was a bill of sale. It would be a 9 hour trip each way, so he decided to break it into two days.The trip north was uneventful and the weather quite pleasant for the first of December.  The best part was meeting Les and his father Leroy.  The only downside was Barry was in a rush to get back to the US and couldn’t spend more time talking with them.  Leroy loaded the plow using his backhoe and even strapped it down, while Barry stood by just admiring the beautiful sight.  Leroy supplied a bill of sale and it was all that was needed for getting the plow back home.

Ripley, Believe It or Not

Barry resisted giving Les a hug for sending the note.  These were big guys and he wasn’t sure that was a Canadian thing.   But he did push Leroy for some history.  Leroy said, “Well, it’s from Ripley, believe it or not!”  The plow had been attached to a tractor he had purchased in Ripley, Ontario some 10 years ago.  The seller said if he wanted the tractor, he had to take the plow too.  So the plow was set aside while the tractor underwent a restoration.  The tractor is gone, but the plow remained.

Les had sent us the model number NDGP-12, which is the same number used by Newgren.  So it is now clear that they did simply change the tag from Newgren to American Bantam, keeping the Newgren model number.  Les also sent the serial number 5005.  While we don’t know what starting number Bantam might have used, it is easy to speculate that they started with 5000 and this was the fifth plow released.We didn’t learn how it arrived in Ripely, but it does give us hope that more Bantam labeled plows will surface.  We just hope that there are more people like Les out there who will save them from the scrap pile.

Research continues on when the name tag was changed from Newgren to Bantam. Clues may be found in the history of the Monroe Auto Equipment Company. We will continue to update this story.