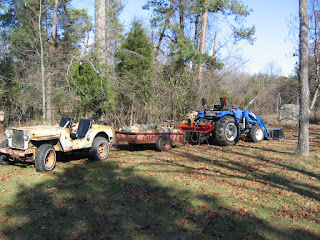 Somehow summer slipped into fall and suddenly it was Thanksgiving again.  Time to gather firewood.  Ole Yeller has been the tool of choice for gathering and processing firewood.  The farm jeep hauls chainsaws and fuel and tows trailers full of wood to the splitter.  Even though we have farm tractors that can be used, the jeep is the better tool for the job.

Ole Yeller doesn’t get much attention.  It sets in the barn, waiting for the next job.  It has been a constant helper, starting and running without missing a beat.  But late this summer the jeep didn’t want to start.  Once it did start, it ran fine and we continued to just go about business as usual.

When Evan came down for a “jeep day”, Barry thought a quick check of Ole Yeller was in order.  The jeep started perfectly and so it was just assumed Ole Yeller had a case of bad gas.  But a couple of days later, the jeep wouldn’t start at all.

Jeeps, like old cars and tractors are pretty simple machines.  If you have fuel, spark and compression (timing) they will run.  So Barry started to check those things.  First, he pulled a plug wire and used a screwdriver to ground it to the block.  Cranking the engine produced a spark.  It was possible that the spark wasn’t strong enough to jump the plug gap.  Barry pulled the distributor cap and the cap and rotor contacts appeared tarnished.  Not a good sign.  He pulled the plugs, three of which were slightly rusted in place.  Not a good sign.  The plugs were worn with a much larger gap than normal and needed to be replaced.

Maybe it was a time for a tune-up.  Barry couldn’t remember when Ole Yeller had been tuned.  A note to Evan and a check of the Farm Jeep chronicles showed the plugs had been changed in ’03.  Almost a decade!  Definitely time for a tune up.

After a trip to the local NAPA parts store, Barry pulled the wires and reinserted them in the new cap. He also install the new rotor and plugs.  Trying to start produced nothing?  Maybe he replaced the plug wires incorrectly.  A quick check of the manual and Blue showed the plugs were wrong!

With only four wires the switch is pretty easy.  Try again.  Nothing.  OK, time to check the fuel.  It is dark in the barn (even with the lights on) and but it didn’t appear much, if any fuel was getting past the carburetor.  The after-market fuel filter is clear and appeared to have a number of rust particles inside the case.  A quick trip to town produced a replacement filter.

Clearly, fuel flow was an issue.  After the filter change, cranking the engine produced a visible flow of fuel.  But the engine still didn’t start.  OK, time to check the timing.  At least with a quick check and adjustment of the points that seems fine.  But no engine fire.  Time to head to the Internet.

A note posted on the CJ2a forum said to recheck all my work, including making sure the plug wires were correct.  There was also a link to a very good paper on timing the engine and in there was a note on how if the distributor had been changed or the oil pump replaced, it might not have been installed in the original position.  This would not change the way the engine operated but it WOULD change the location of the plug wires on the distributor cap.

It was at this point that Barry remembered an email from Evan early in the process which said “Are you sure you didn’t have the plug wires in the correct order before you fixed them? I seem to remember battling this before (although it could have been on the ’49) and that there was something odd with the firing order.”

Barry moved the wires one position clockwise AND the engine fired immediately!  What a marvelous machine.

NOTE TO THE GRANDKIDS:  When you do a tuneup in 2022/23 be sure to watch for those pesky non-standard plug wires…