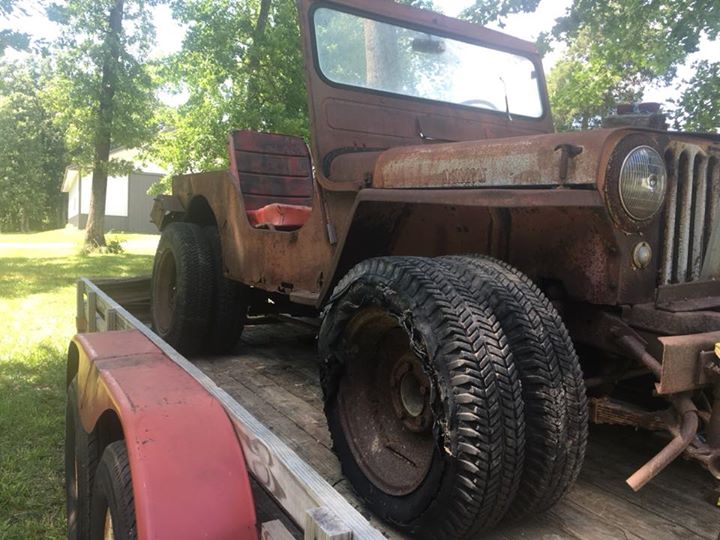 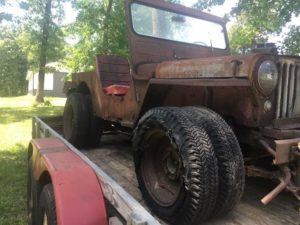 Here at Farm Jeep, we have been happy with our two “farm jeeps” and haven’t thought of adding to the herd.  We lack the time and space to add more projects.  However, one recent morning Barry, as he often does, was looking at the Jeeps for sale over at eWillys.com.  There he saw an ad for a 1950 CJ3a equipped with dual wheels all around, a Monroe lift and other farm options.  Barry fired off a note to Evan, saying “I’m tempted” and Evan immediately responded “I’m in.”  So in a matter of moments we were the proud owner of another 3a.

There is nothing we enjoy more that a JRT – Jeep Retrieval Trip.  So we headed out to Western Kentucky, about a 4 hour drive.  Brad, the seller. turned out to be have his own collection of Jeeps and has a special interest in VEC (very early civilian) models.  The acquisition of his latest VEC had changed his plans for the 3a.  We could have spent the day with Brad and hope to stay in touch.  He had us loaded (doing most of the work) and then took the time to show us his collection of Jeeps, boats and even old bull dozers.

On the trip down, we had time to discuss just what we might do with this Jeep.  Given time and budget limitations we decided that we would do preservation work and leave the Jeep as a survivor.  Barry was quick to resolve the issue of what to call this jeep.  As posted earlier, grandson Robbie has suggested that perhaps a more appropriate name for “Ole Yeller” was Rusty.  Barry had no doubt that Rusty was the name Robbie would pick. 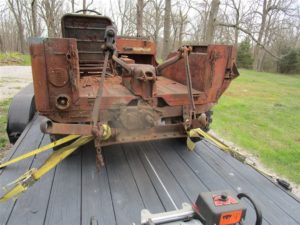 Rusty came without a firewall data plate, but remarkable, the original State of Maryland title.  It includes both the engine and body numbers, along with the original owners name.  Brad had acquired Rusty from a person who had found it in a Tennessee junk yard.  That person saved it from being scrapped.  While we don’t know the route taken, the original title will help us do some research.

Rusty may have come from the factory with most of his accessories. That would include the Monroe lift, front weight and radiator screen, governor (handle present, but unit missing), and heavy duty springs

There are other interesting clues we need to follow. 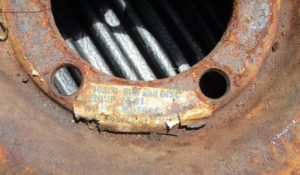 Brad had removed the dual wheels.  Pictured above is a label still attached to one of the rims.  We assume that the dual wheel adapter protected the label.  We don’t know when the dual wheels were added, but guessing that it was at the time of purchase.

And what we don’t know

It appears that some owner added a snow plow setup in the 1960s.  The cables on the dash were used to operate the 12 volt electric lift.  The governor was removed (but not the control handle) and a modern alternator put in its place.  A battery was added for this separate charging system.  We don’t know what happened to the governor.  We have the snow plow motor. 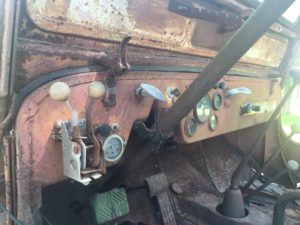 What we don’t know is the purpose/use of the outlets added to rear of the Jeep. 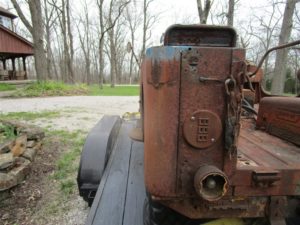 The wiring may give us clues.

This has all happened so quickly we don’t have a plan.  For now, we may have to move some farm equipment out of the barn.  Summer shows are coming up and we may not get back to Rusty for some time.  We will post any new information and looking forward to discussing Rusty and his features with the Jeep community.