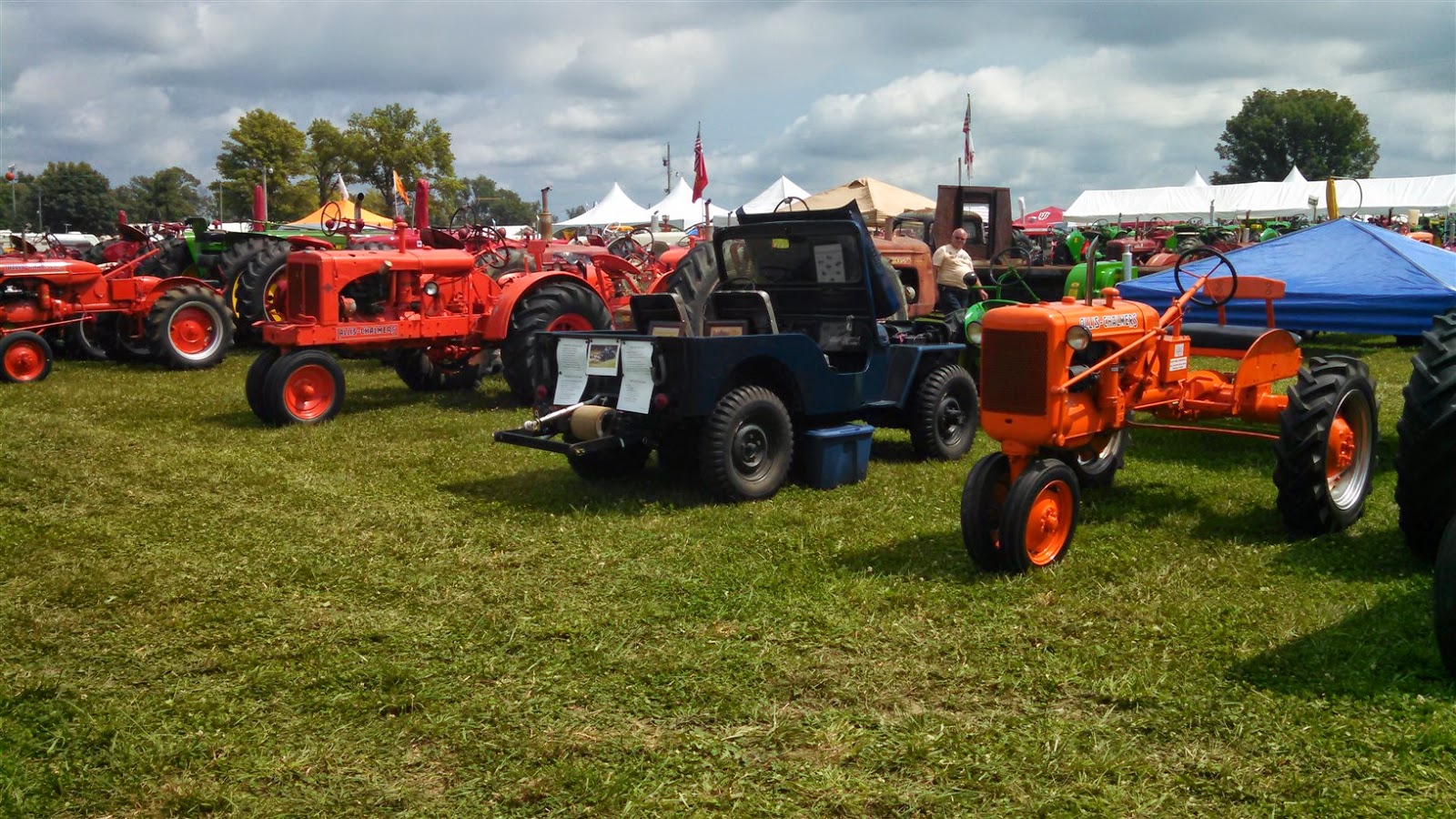 The best part of taking the Farm Jeep to antique machinery shows is the chance to meet people and learn more about how jeeps were used on the farm.  At a recent show held in Greensburg, Indiana, Barry heard from several people who had (or knew someone who had) used a jeep to tow a hay baler.  One advantage of using a jeep to tow a powered baler (the baler had its own engine) was the speed the jeep provided in moving between fields.
But the real lesson of this show was the discovery of a “jeep” we didn’t know existed, a “jeep” with it roots firmly planted  in the tractor world.  The featured tractor of the show was the Minneapolis-Moline and while wandering through the extensive and very interesting display, Barry spotted a sign that had the words Victory Jeep (there may have been other words, but these caught his eye).  He headed for the club tent and  asked if someone could tell him about the jeep sign.  The immediate response was “You need to talk to Cheryl.”
Cheryl turned out to be a great source of information.  She not only publishes “The Prairie Gold Rush” a quarterly magazine for Minneapolis-Moline enthusiasts, but owns a NTX  Jeep!   The NTX was designed as a military vehicle, not as a tractor.  Cheryl sent us this photo and included the following note –

“I have attached a picture of the NTX’s we displayed at the Rice Lake WI Show in June of this year. It is the most NTX Jeeps we have ever gathered in one place. However, there are still at least 18 more out there we know of (in various degrees of restoration of course) that did not show up. There were 840 built (which we are sure of) and really don’t know how many have survived. They are a really fun vehicle to own. My NTX is gray, the closest one in the picture with the American flags.” 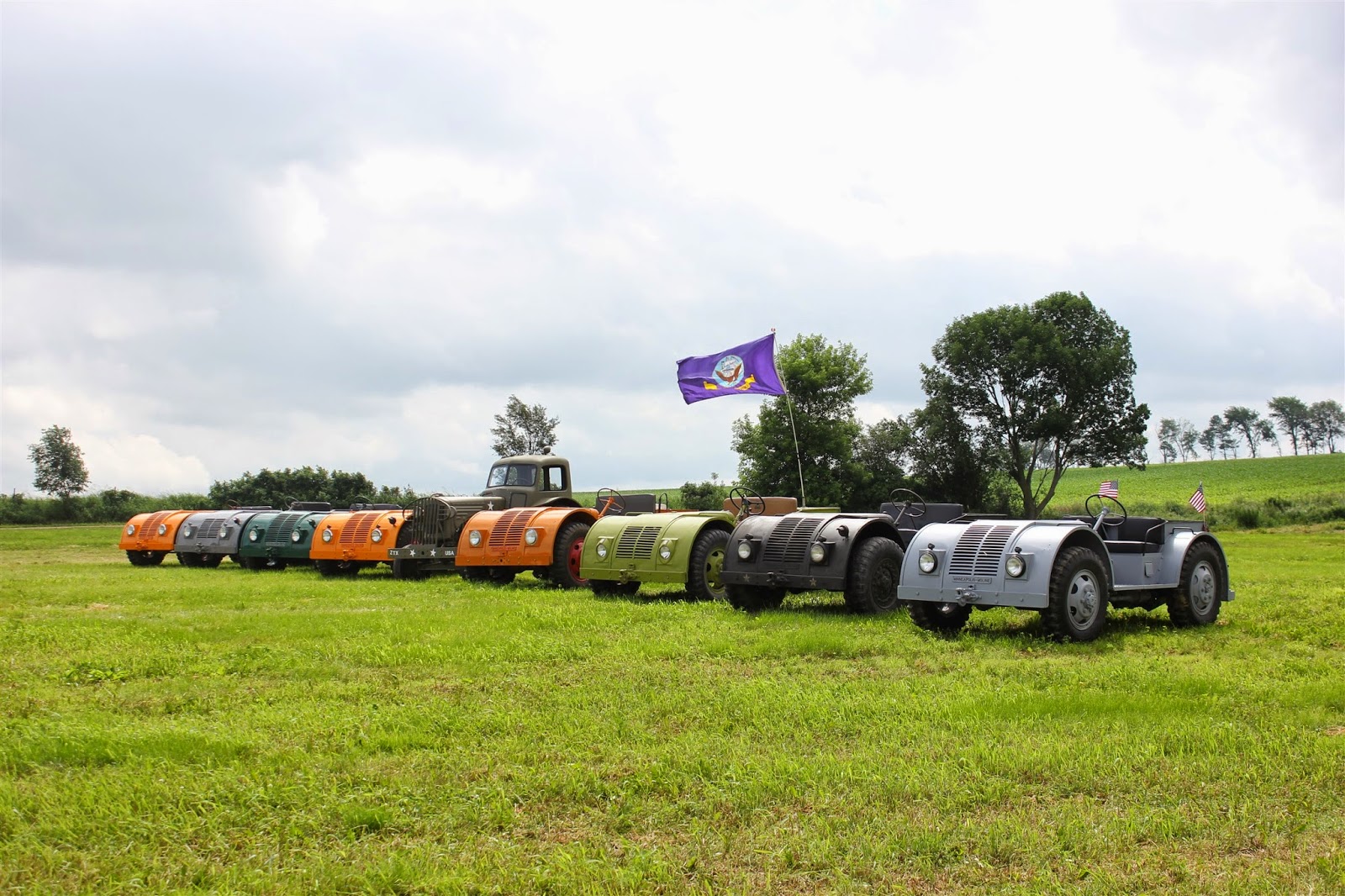 Also included in this group shot is the NTX that made an appearance in the 1944 movie The_Fighting_Seabees.

Other MM folks were quick to point out that Willys had stolen the “jeep” name and had been sued by MM to stop them from using it.  Hmmm,  the Farm Jeep doesn’t have the word Jeep stamped anywhere on the body.   Could it be they are correct? After this quick history lesson, it is clear that this was the first vehicle with the “jeep” name and it was not a Willys.  For more info on the NTX, check out this article- The Industrial Jeep – 1943 NTX

Just what is a tractor?
Following this informative encounter, Barry headed over to the RFD network’s Classic Tractor show exhibit.  They were covering the show and selling DVDs and other tractor related items.  Barry didn’t see any Farm Jeep information and inquired if they might have any jeep related items.  The short answer was “No, we do tractors, not jeeps.”  The challenge was on, so Barry did his best to educate them.  He showed them copies of ads and tried to make his case that the jeep should be on the tractor show.  Time will tell.
Six degrees of separation?
Following the conversations with Cheryl and the RFD crew, Barry started looking for more NTX information  and  came across some interesting facts.  From the CJ3a info page –
“Willys involvement with farming and tractors started long before the Jeep. After WWI tractors started to replace the horse on the farm. At this time John N. Willys, with several partners, purchased the Moline Plow Co. and Willys-Overland produced the Universal Tractor. In the 1920’s Mr. Willys sold out to his partners. For more information about the Moline Plow Company see the unofficial Minneapolis-Moline web-site.“
Barry passed this information along to the MM folks, in hopes that they might feel more kindly toward the Farm Jeep.  He also came across a site with great Farm Jeep history.  Check out This-Old-Jeep.com.
We look forward to more shows and learning more about our version of the Jeep.