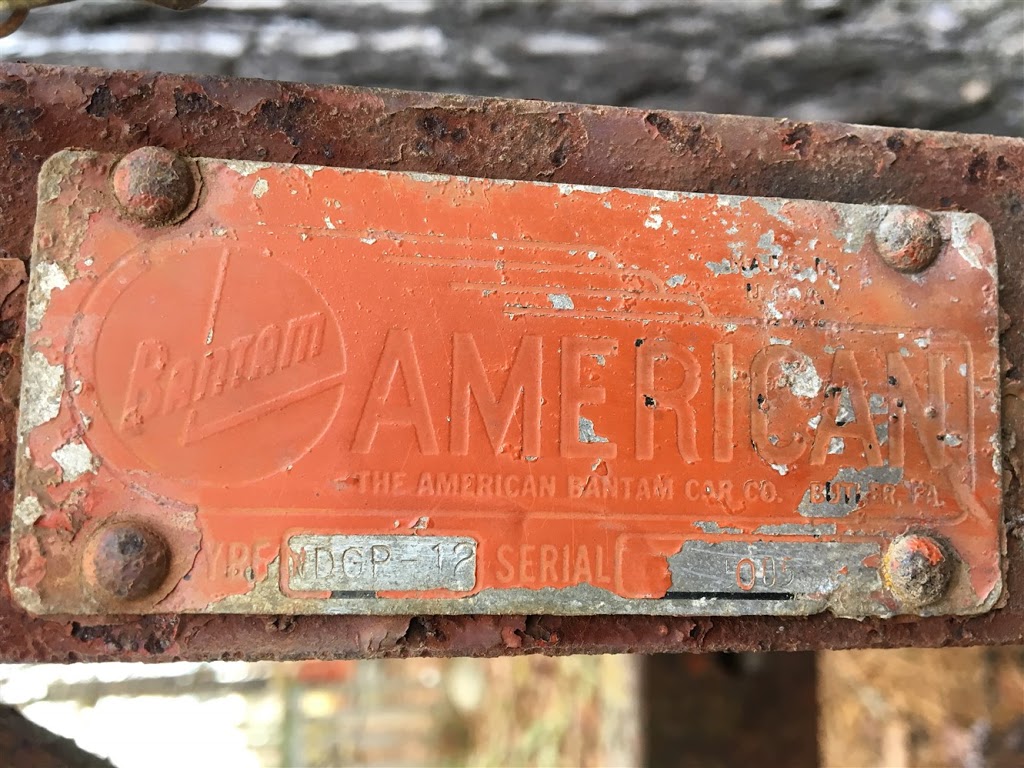 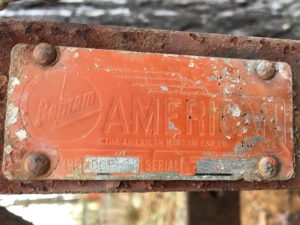 This is a story we couldn’t make up.  We received a note from Les from near Waterloo, Ontario who had found our posts about Bantam plows.  He said his father had an old plow with a Bantam tag that hadn’t been used for 10 years and was about to go to the scrap pile.  Les ask if we might know of anyone who would be interested in it.

We jumped on the opportunity.  Four days later, Barry was in Ontario to pick up this beauty. 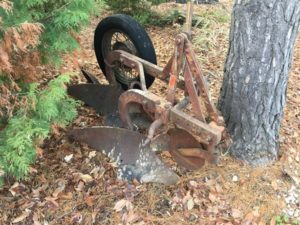 The plow appears to be complete.  The coulters are frozen, but the landside gauge wheel hardware is there and is free.  It does have on old wire car wheel instead of a Jeep rim. but it adds character.  Not sure how much, if any restoration, we will attempt.
The trip
Evan had to miss this JPRT (Jeep parts retrieval trip).  Barry’s first pre-trip task was to determine what sort of paperwork he would need to bring the plow back to the states.  Some net searching indicated that all that was required for used farm equipment was a bill of sale. It would be a 9 hour trip each way, so he decided to break it into two days.
The trip north was uneventful and the weather quite pleasant for the first of December.  The best part was meeting Les and his father Leroy.  The only downside was Barry was in a rush to get back to the US and couldn’t spend more time talking with them.  Leroy loaded the plow using his backhoe and even strapped it down, while Barry stood by just admiring the beautiful sight.  Leroy supplied a bill of sale and it was all that was needed for getting the plow back home.
Ripley, Believe It or Not
Barry resisted giving Les a hug for sending the note.  These were big guys and he wasn’t sure that was a Canadian thing.   But he did push Leroy for some history.  Leroy said, “Well, it’s from Ripley, believe it or not!”  The plow had been attached to a tractor he had purchased in Ripley, Ontario some 10 years ago.  The seller said if he wanted the tractor, he had to take the plow too.  So the plow was set aside while the tractor underwent a restoration.  The tractor is gone, but the plow remained.
What we learned
Les had sent us the model number NDGP-12, which is the same number used by Newgren.  So it is now clear that they did simply change the tag from Newgren to American Bantam, keeping the Newgren model number.  Les also sent the serial number 5005.  While we don’t know what starting number Bantam might have used, it is easy to speculate that they started with 5000 and this was the fifth plow released.
We didn’t learn how it arrived in Ripely, but it does give us hope that more Bantam labeled plows will surface.  We just hope that there are more people like Les out there who will save them from the scrap pile. 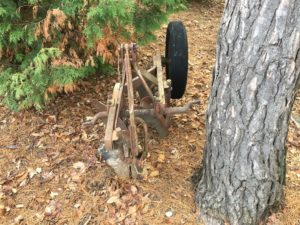